Jolie Credits Acupuncture for Her Recovery from Bell’s Palsy 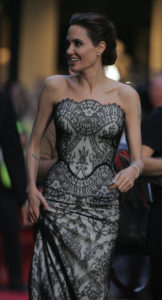 Like most things involving Angelina Jolie, stepping foot into her house is an experience so heightened one wonders if it’s for real or the product of careful orchestration. The large gates to her recently purchased Los Feliz house—an 11,000-square-foot Beaux-Arts mansion once owned by the epic filmmaker Cecil B. DeMille—slowly swing open, revealing rolling lawns, lush trees at the perimeter. No one’s there, and all is quiet except for the delicate sound of fountains, arched in a row over a swimming pool. A number of doors to the house are open, as if posing some riddle from a fairy tale—which one to enter? Inside, the vibe is airy and calm: all open windows and cross-breezes, creamy-white unlit candles, soft creamy-white furnishings. Finally she emerges from the other side of the house and glides across the room in a creamy-white, floor-length caftan. Her hair is down, her feet bare, only a touch of makeup, her skin luminous. She smiles widely—a beneficent, ethereal wood nymph.

But as soon as she starts speaking, you realize that your preconceived notions about Jolie aren’t quite right. She’s not a celestial goddess. She’s not the high-and-mighty do-gooder. She’s not the intense control freak—or at least not obviously so. She comes across, rather, as normal-person friendly and practical, even chitchatty. She explains the deal with the big empty mansion. She moved into this space just four days ago with her six kids. It wasn’t for the prestigious history or the architecture. She needed a good place fast, somewhere secluded, with a lot of rooms; this one, which was listed for around $25 million, has six bedrooms and 10 bathrooms. Following her September 2016 filing for divorce from Brad Pitt, she and her children spent nine months in a rental, basically living out of suitcases. And so she hasn’t really unpacked, barely knows her way around the place, has never had a real visitor, and isn’t sure where the best spot is to sit and talk. With that in question, she roams from room to room—the fabulous kitchen, worthy of a Nancy Meyers movie, charming gray library with a library ladder (her favorite room in the house), the generous landing at the foot of a sweeping staircase, anchored by a round table with a bouquet of white flowers. She finally settles on the living room, which a set-decorator friend furnished on the fly, with two creamy-white sofas and some big throw pillows. She looks at them curiously. “I didn’t even know I needed ‘throw pillows.’ ” Decorating, house stuff, “that was always Brad’s thing.” On cue, as if taunting her, Jolie’s large Rottweiler, Dusty, soaking from a trip to the pool, jumps onto the sofa, soiling it. She sighs, amused, half tries to wipe it off with her bare hand, then gives up and sits somewhere else.

Life in her household is apparently like this—messy, relaxed, normal. The kids are polite but not phony polite. Zahara, 12, whom Jolie describes as “the rock” of the family, comes downstairs. “Zaz!” Jolie cries, midsentence. They discuss the whereabouts of everyone else. Zahara hugs the wet dog. Jolie laughs and tells her daughter about the swim Dusty just took. We move to the kitchen, where Jolie fixes herself a cup of tea. Vivienne, 9, comes in with a friend, having just been at a sleepover. She’s wearing a jean backpack covered with pins. Jolie envelops her in her arms. I ask the girl if she’s called “Viv” or “Vivienne.” “Either one!” she says with a smile. She dumps her stuff on the counter and goes out to play with her friend. Jolie picks up a small piece of a blanket, shredded to death, and explains, laughing, “She has 32 blankets. She is very into her blanket, and she gets very mad if you wash her blanket. She actually said to me the other day, ‘Mom, I can taste my blanket.’ ‘That, honey, is a sign that it really, really needs to be washed.’ ”

Jolie tidies up Vivienne’s things and promptly spills her entire mug of tea all over the counter. We step outside and there’s Shiloh, 11, and Knox, 9, hanging out. Shiloh, who likes to dress like a boy, is wearing a camouflage jacket, long shorts, and heavy black sneakers, despite the blazing heat. Knox immediately wants to know when Jolie’s going to put up the waterslide. “How about a ‘Hello, Mom’?” she says, with a hug, sounding like just about every other loving, exasperated mother in America. So far, there’s only one piece of personal artwork up—a black-and-white photograph on the mantelpiece of the six children, smiling and holding their various pets—dogs, reptiles, and rodents.

Jolie and Pitt, who’d been together for 12 years and appeared to be the most gloriously evolved couple in Hollywood, split last September. She filed for divorce suddenly “for the health of the family,” according to her lawyer, and announced she was seeking sole custody of the children, three of whom are adopted (Maddox, 15, Pax, 13, and Zahara), three of whom are biological (Shiloh, Vivienne, and Knox). Things had been rocky for some time, but the last straw was a dramatic trip on a private plane, where there was reportedly a physical and verbal altercation between Pitt and Maddox. When they touched down, Jolie went home with the kids, effectively kicking him out. This was no “Conscious Uncoupling.” An anonymous phone call was made to authorities. The F.B.I. and the Los Angeles County Department of Children and Family Services began investigating Pitt for child abuse. He was soon cleared and later said in an interview with GQ Style that he was smarting from the pain of his suddenly broken family and admitted he had a serious drinking problem.

There were rumors he was having an affair with Marion Cotillard (denied by both Pitt and Cotillard). Jolie got the early jump P.R.-wise. But Pitt won hearts and minds with the mea culpa in GQ Style. The two are still negotiating the terms of their divorce.

Meridian Acupuncture and Wellness offers services to Portland area clients. For more information on acupuncture and other services we offer, contact us today.